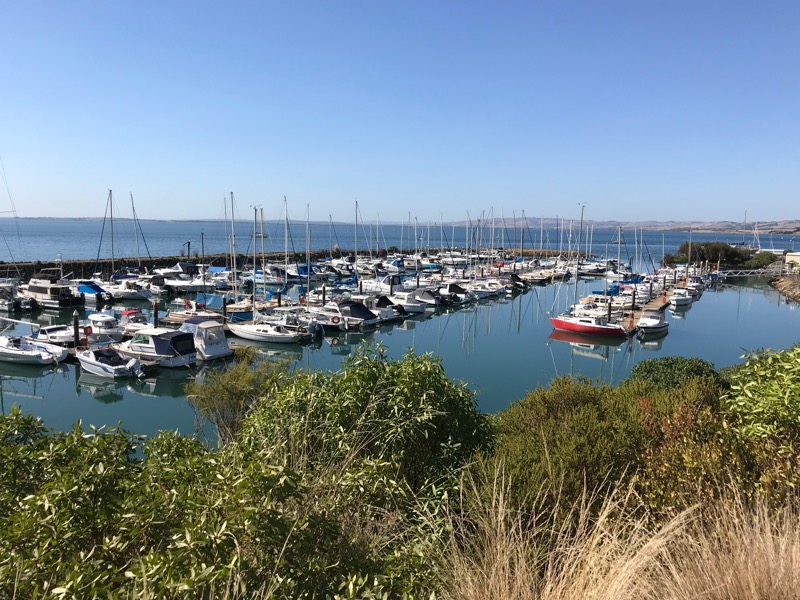 A planned stopover for a few days became three weeks.

An uneventful trip along the south coast of the Mornington Peninsula and around Cape Schanck into Western Port Bay eventually brought us to Cowes on the northern side of Phillip Island. We spent the night here on a swing mooring, but didn’t go ashore. We’ve previously been to Cowes by both road and on Tom’s boat, Lady Daka. It’s a nice seaside village, catering to both holiday makers and locals; it’s the main hub for the island. It has the usual array of shops, cafes and restaurants that you would expect for a little town, but has no marine services apart from a jetty used by the local ferry and commercial operators. You can go alongside but can’t stay, though dinghies can be left here while ashore. Parks Victoria provide overnight free moorings to the west of the jetty, and locals tell me there is good holding to the east of the jetty amongst and around the private moorings.

While in Geelong we had attempted to repair a leak in one of our water tanks, without absolute success. To have another attempt at repair we needed access to shore power, so had decided to either go to Hastings marina to the north or Newhaven marina to the east. Our preference was Newhaven as Dee, Mike, Josh, Grace, Marilyn and Peter were holidaying close by in San Remo.

The next day we moved around to the east side of the island, to the Newhaven Yacht Squadron where we were able to get a marina berth, at a very reasonable rate. The plan was to spend five nights here waiting for a couple of fronts to blow through before departing for Wilson’s Promontory and Lakes Entrance.

How wrong were we? Glenn got the flu and didn’t feel like doing anything for quite a few days. By then we had missed the weather window and waited two weeks before another opportunity presented itself.

A great, big thank you to Dee et al for the couple of days we spent with them, and for letting us use the washing machine in their holiday unit.

After a couple of days in bed, Glenn started to feel better. We had another attempt to repair the water tank, to no avail. That job is now postponed until we can install a new tank. We now had plenty of time to relax and enjoy Newhaven and San Remo.

Newhaven itself is really just a suburb on Phillip Island. The marina is a good place to berth, offering protection from all points. The entrance is narrow and becomes shallow at low tide, but once in the marina there is enough depth. The marina only caters for vessels up to 12m and is close to 100% occupied; make sure to enquire ahead. The clubhouse has toilets, showers, small kitchen and lounge area; it’s functional and clean. They provide haul out facilities with a small work yard, as well as having careening poles. We found the club very welcoming and accomodating, and enjoyed our time there.

The local area is mostly just houses and accomodation with a bakery, some local businesses and an overpriced restaurant. Luckily, San Remo is an easy and pleasant twenty minute walk away, over the bridge to the mainland.

San Remo used to be a busy fishing port, and still has a small fishing fleet along with some day cruise and charter vessels. These commercial operators occupy the majority of the main jetty, with a few berths available for short stays of itinerant vessels. Apart from the jetty and a floating pontoon there are no other marine services available. The town has a supermarket and coin laundry along with the usual assortment of cafes, restaurants and shops. It’s smaller than Cowes.

One of the reasons we went to Newhaven was an expectation that when we left we would head south down the channel past San Remo and out into Bass Strait. Guess who forgot to check the chart? Access to San Remo from the north is restricted by a bridge which allows vessels with less than 12 metres air draft to pass underneath; all other vessels must access San Remo from Bass Strait to the south. From the water to the top of Yamoya’s mast is 16 metres, so we had to head back the way we came and circumnavigate Phillip Island. After 6½ hours we anchored in Cleeland Bight, just south of San Remo and only 2 miles from where we departed.

Cleeland Bight has a few public swing moorings available for use. While protected from the west and south it does get a small amount of reflected swell coming in from the east past Red Point. On a tip from Stan, aboard Felix (the catamaran), we chose to anchor a bit further along to the south east, closer to the entrance from Bass Strait; just behind the No.2 beacon and a small reef. This spot gave the same wind protection with less swell, and good holding in a sandy seabed.

We spent a few days here waiting for the weather. Sonja cooked up some cheese and spinach pie one day, and on another we took the dinghy up to San Remo to have lunch with Tom and Alma who drove down from Melbourne to say hello.

After one aborted attempt to leave (see this post, Steering Failure) we finally got underway, headed for Lakes Entrance.

This site uses Akismet to reduce spam. Learn how your comment data is processed.