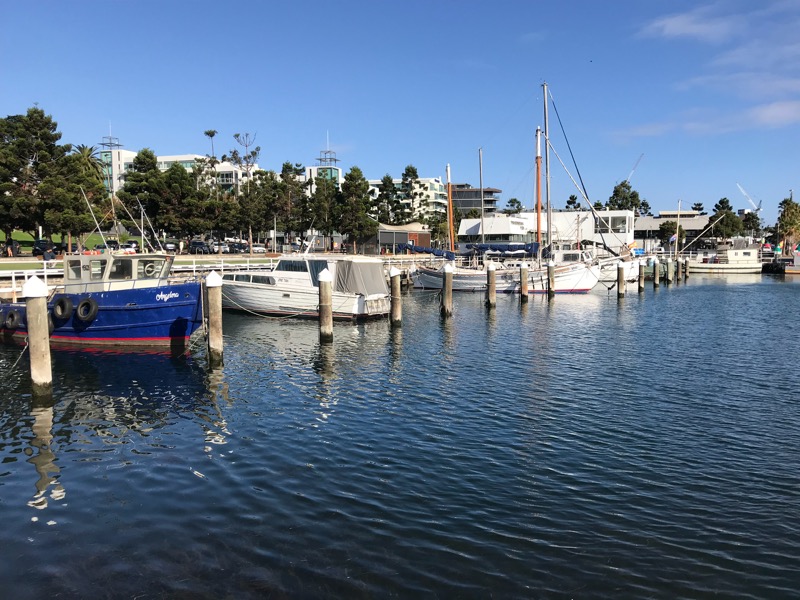 The city of Geelong is located south west of Melbourne and was our first port of call after leaving Melbourne.

With a population of about 200,000, it’s a lovely little city with a great waterfront. We came here to haul out Yamoya for a bottom scrub and antifoul (see Hauling Out In Geelong), and had some time for investigating.

Geelong used to be a manufacturing town, best known for its Ford factory and oil refinery. But like most large scale manufacturing in Australia, all of that is now gone. It’s been replaced with tourism and education, and appears to have made the transition well. We enjoyed our time here, walking around the waterfront and the adjacent CBD, and spending some time with friends Zivko and Mira who helped build Yamoya.

At first subtle, but then the further you venture you realise that the waterfront esplanade is scattered with colourful sculptures made from wooden bollards. These are the Baywalk Bollards and they chronicle the city’s history.

As you would expect, cafes and restaurants abound. One of our favourites was this floating seafood take away where we bought fried calamari and fresh mussels. The yacht club also had a nice cafe which was open to the public.

While we certainly didn’t visit everything there is to see here, such as the Botanic Gardens and the National Wool Museum, we enjoyed ourselves immensely. The yacht club was friendly and inviting, and the marina was good. With a major upgrade to the marina planned later this year, Geelong is a wonderful cruising destination.

One thought on “Geelong”

This site uses Akismet to reduce spam. Learn how your comment data is processed.